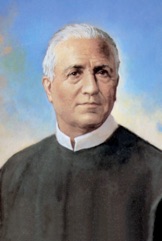 Fr. Alfonso Maria Fusco was born in Angri, Italy, on March 23, 1839. His parents, Aniello Fusco and Giuseppina Schiavone, had been married for four years but had no children. With anxiety and fear, they went to Pagani to beg the intercession of Blessed Alfonso Maria Liguori, where they confided their fears to a Redemptorist priest, Fr. Francesco Saverio Pecorelli. He reassured them, saying, “You will have a son, you will name him Alfonso, and he will become a priest and take up the life of Blessed Alfonso.” The baby boy was in fact conceived soon after, and when he was born, his parents named him Alfonso, instead of Carmine, the name of his paternal grandfather, as would have been customary. Later, the Fuscos would give the name Carmine to their second son, who died when he was a year old, and to their third son.

For his education, Alfonso was entrusted to learned and holy priests, among whom Canon Gaetano De Angelis, as Alfonso’s confirmation sponsor, took especially good care of him.

Alfonso came to the decision to become a priest from an early age. Even as a child, he was moved by the needs of younger children. Once, he took some blankets from his own home to a neighboring boy named Vincenzino, who was sick in bed with a fever and feeling cold, while his mother was working out in the countryside.

When he was eleven years old, on November 5, 1850, Alfonso entered the Seminary of Nocera Inferiore, founded in 1564. It was one of the first seminaries founded after the reforms of the Council of Trent in 1563, which called for them to be opened. Here, Alfonso’s call to the diocesan priesthood came to fruition. His peers at the seminary, including Fr. Giuseppe Nappi, remembered that he was always respectful towards his teachers, demonstrating great faith and diligence. He was ordained a priest on May 29, 1863, by Archbishop Antonio Salomone of Salerno, who was then the apostolic administrator of Nocera following the death of Bishop Michele Adenolfi in 1860. The ordinations were conducted at Avellino, in the private oratory to which Bishop Salomone had withdrawn due to the political upheaval of the early 1860s. He celebrated his first Mass in St. John the Baptist, the mother church of Angri.

Before becoming a priest, Fr. Alfonso had dreamed that Christ had ordained him to found an institute of religious sisters and orphanages for boys and girls. As a seminarian, when he was at home in the summers, he spent his time with the children of his city, becoming their friend and brother; he listened to them and lifted their spirits, bringing some comfort to their lives on the streets. For the children, his presence was a breath of fresh air. As a seminarian, he saved three thousand lira through patience and perseverance in order to found an institute, and deposited the money in the Bank of Angri, operated by clergy. Unfortunately, though, he lost this money when the bank failed during revolutionary upheavals.

Once he was a priest, he became a beloved father to the children. He started a school in his family’s home, providing the children with books, shoes, and clothing. On Sundays, he brought them to church for Mass and catechism classes. He installed looms and schools of embroidery, tailoring, and dressmaking for the girls. For the boys, he opened a printing press with an adjoining bookstore, a woodmaking shop, and a shoe store. He named the whole project “Opera degli Artigianelli,” or “charity of small crafts.” The charity for children did not last long, but the women’s institute quickly outgrew its space. After the example of St. John Bosco, with whom Fr. Alfonso exchanged letters, he opened the Oratory across from the school, as a place for the community to spend time and hold gatherings.

The Oratory was based in the Chapel of the Angels, today the Church of St. Jude Thaddeus, under the patronage of the Guardian Angels and St. Aloysius (in Italian, “Luigi”) Gonzaga, so that the children who came were called “Luigini” by locals. The protests of the locals over the noise of the children, however, forced the Oratory to close, to the great disappointment of Fr. Alfonso.

In 1866, Fr. Alfonso worked hard to assist those who were sick with cholera, an epidemic which swept all of Campania that year. Even Fr. Alfonso became ill, but escaped danger.

In 1868, he was named the sacristan of the church of St. John the Baptist in Angri, and in 1873, he won a competition to become cantor there. On May 4, 1884, Fr. Aflonso and his sister Anna became Franciscan tertiaries in Angri, bound to the convent of St. Mary of the Angels of Nocera Superiore. In 1897, he was chosen as a canon of the cathedral and spiritual director of the Confraternity of S. Margherita of Angri, where he had been an organist since 1865.

Through all this activity, the thought of a foundation for abandoned children remained fix on Fr. Alfonso’s mind. Years earlier, the abbot of the church of St. John, Francesco Saverio Tortora, had also wanted to found an orphanage, but his dreams came to nothing due to the revolutions of the nineteenth century.

In 1876, with the help of a noblewoman named Raffaella Graziano, who made available her house and garden on Via Risi, Angri, Fr. Alfonso founded the orphanage the townspeople had earnestly desired. He entrusted its care to the Compassionist Sisters brought from Castellammare di Stabia, che ben presto congedò per la troppa diversità di vedute. In the meantime at the Graziano house, he met the goddaughter of lady Raffaella, Maddalena Caputo, who became the support and right arm of Fr. Alfonso; she shared his zeal and his calling to dedicate one’s life for the sake young people. Blessed Alfonso received great encouragement for his work from Servant of God Fr. Giuseppe Maria Leone, a Redemptorist in the Convent of Angri, which closed in 1915. Fr. Leone was also a spiritual counselor and confessor for Blessed Bartolo Longo, founder of the Shrine of the Blessed Virgin Mary of the Rosary of Pompeii.

On September 26, 1878, ce he had obtained permission, after repeated requests, from Bishop Raffaele Ammirante of Nocera, Blessed Alfonso, Maddalena Caputo, and three other colleagues, founded the “Little House of Providence” in Angri, in the hamlet of Ardinghi, next to the Church of the Annunciation.

Fr. Alfonso rented a block of flats from the pastor of Annunciation, Fr. Giuseppe Lattarese. The space was donated to pastor by the Scarcella family, the family of Fr. Luigi Scarcella, in order to provide assistance to poor young girls. They agreed to support the institute with three hundred lira per year and to donate the whole building once the institute was completed. Fr. Giuseppe Lattarese thus honored the wishes of his donors.

In 1880, Fr. Alfonso received a generous offer from the last heir of the Scarcella family and acquired the rooms he was renting for 600 lira. He then bought the rest of the building from the pastor of Annunciation for 2200 lira, and soon after the garden as well, which the pastor gave him at a good price. Blessed Alfonso faced many challenges in making this institution a reality, from the families of the children, the town of Angri, and the police. They complained to the bishop and the prefect of the province. The prefect, however, after hearing Fr. Alfonso in Salerno, become an enthusiastic supporter of his work.

Bishop Ammirante went to Angri on July 16, 1880, to bless the work of Fr. Alfonso. That day, the young women of his newly founded community received their religious habit. This was the official beginning of the Sisters of St. John the Baptist.
The community’s houses multiplied in Campania: Napoli, Torre del Greco, Pianura di Napoli, Benevento, Frasso Telesino, Pontecagnano Faiano, Montecorvino Rovella, Mercato Cilento, Acerenza in the province of Potenza, and San Marco la Catola in the province of Foggia. Fr. Alfonso attended the opening of the first house in Rome in 1895, where Sr. Crocifissa, Maddalena Caputo, the guiding light of the sisters for a quarter of a century, died on February 4, 1903.

In 1888, Bishop Luigi del Forno, the bishop of Nocera from 1885 to 1913, approved the rule of the institute. He was the same bishop who asked Fr. Alfonso to write the rule, in order to gain diocesan approval, with an eye towards ultimate approval by the Holy See. In writing the rule, Blessed Alfonso was inspired by that of the Sisters of the Stigmata, as Fr. Leone advised. In 1902, Sister Bernardina D’Auria left for New York to start a new foundation there. Other sisters subsequently joined her there, and the new house was opened in 1906, with various service projects and the spiritual care of Italian immigrant families.

Fr. Alfonso was beatified by Pope St. John Paul II on October 7, 2001, together with his contemporary Fr. Tommaso Maria Fusco, his brother priest of the same diocese (though not a relative by blood).

Actor of the Cause: Congregation of the Sisters of St. John the Baptist