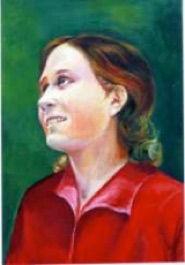 Born in 1710 in Piansano, Viterbo, Italy, Lucia Burlini lived a long life, in spite of the hardships she encountered and the illnesses she endured without effective help from the treatment available in her time.

She met St. Paul of the Cross at the age of twenty-four and followed his direction with diligence and exceptional perseverance. She did not want to have a family of her own: instead, she desired to consecrate herself totally to Christ crucified and to an active apostolate, which was unimaginable and discouraged for women in those times.

Encouraged by St. Paul, she continued supporting herself with her job as a weaver for a market confined to her own town and the surrounding area. He also encouraged her, in that silence, among spools, plotters, combs, hemp fabric, linen, and wool, to sing of her love for Christ, chosen as the only center of her life. She drew from the example of her director, among the most famous missionaries in the history of Italian Catholicism, the desire for an apostolate with two goals, both very ambitious and demanding: first, support for the Passionist community of the nearby house of the “Cerro,” in Tuscany, Viterbo, along with other more distant communities; second, direct contact with the families in the area, for the collection of alms specifically in support of the work of St. Paul of the Cross.

Working towards her first goal, she entered into the heart of the religious community, edifying all with her unaffected fervor and discovering difficulties, charitable projects, and needs that could only be seen by a person of extreme trust. St. Paul came to consider a true mother of his congregation.

As she worked towards her second objective by reaching out to families, she became aware of family crises, stubborn quarrels, dangerous hatred, and indifference to religious practices. In every case, she knew how to find that right word to restore trust or the advice to bring back clear judgment. As a result, she was reckoned as an exceptional “worker of peace,” in town and outside of it.

The Lord revealed many times that he was pleased with this twofold work, through occurrences that were then considered miraculous at the time.

With a wealth of years, experience, and merits, she went up to heaven on May 1, 1789, aided mysteriously by her director, as he had promised her years before.

Her reputation for holiness has not abated in her homeland and in the memory of the Passionists. Since 1948, her life and witness has been brought back to light through magazines and countless editions of her biography and correspondence with St. Paul of the Cross, with replies that reveal a strong fondness and the sharing of a serene, solid spirituality, open to the desire for a more applied and active apostolate.

In October 1987, the Church declared her Venerable and now, after many reports of extraordinary events brought about through her intercession, is examining the authenticity of a purported miracle, after which she would be declared a Blessed, and finally a Saint.

Now, a very broad and select audience, Italian and foreign alike, wants Venerable Lucia Burlini soon to be held up to the Catholic world as an expression of the lay life, able to put into every good endeavor the fullness of a spirituality, like hers, marked by wisdom and the experience of the Cross of Christ.

Actor of the Cause: Passionist Roman Province of the Presentation of Mary