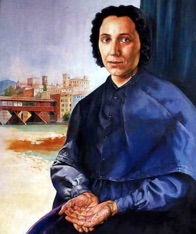 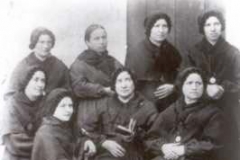 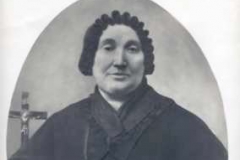 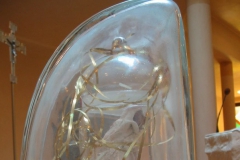 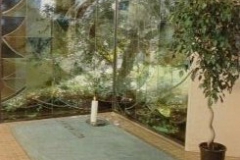 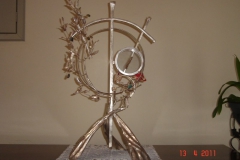 Gaetana Sterni lived her entire life in Bassano del Grappa, an ancient and lovely city in the province of Vicenza, Italy. She came there with her family at the age of eight from neighboring Cassola, where she was born on June 26, 1827. Her father, Giovanni Battista Sterni, managed a country estate on behalf of the Mora, a noble Venetian family, and lived comfortably in the Mora house in Cassola with his wife and their six children. In 1835, he moved with his family to Bassano. Soon, though, a series of events drastically changed the Gaetana’s family circumstances. Her older sister Margherita died at the age of eighteen, and after a terrible illness, her father also died. At the same time, her brother Francesco left home and family in dire economic straits to become an actor. Thus Gaetana had to grow up fast, sharing with her mother the many difficulties of their daily life. Gifted with keen intelligence, she proved to be sensible, mature, and full of life, “desiring to love and to be loved.” Her formation in faith was solid and founded on the witness and teaching of her mother, supported by prayer and frequent reception of the sacraments. In this setting, she soon earned her reputation for a sunny disposition, good sense, and strong femininity. Elegant, attractive, and charming, she caught the attention of a young businessman, a widower with three children, who asked to marry her.

After a careful judgment of her own feelings and the responsibilities she would be taking on, she went against the opposition of her guardian and accepted this proposal from Liberale Conte. The young wife, not yet sixteen years old, entered the new house and filled it with her liveliness. She gave to her husband and his three children, who loved her as a mother, their old peace and joy. When Gaetana realized she was pregnant, the couple’s happiness was complete.

Once, while praying, Gaetana was troubled by a premonition of impending death for her husband. She felt like she “dying of a broken heart” at the idea of losing him, who for her was “more dear than life.” Deep down, however, she found the strength not to despair and to trust in God with all her heart. Unfortunately, her premonition came true, and Liberale, full of youth and good health, died after a brief illness. The young wife felt terrible anguish for the loss of her husband, whom she loved more than herself, for the grief of the children, orphaned once again, and for her own baby, who would never know his own father.

She was overcome by grief, but when she returned to herself, she remembered her premonition and what she had gone through. She once again put her trust in the Lord, placing her whole life in his hands. Gaetana found in Him the strength to live, to take of her three little ones and carry her pregnancy to term. Her baby also died, however, just a few days after his birth. Thus years of bitter widowhood began. Her husband’s family did not take into account the fondness that bound Gaetana and the children together, leading to misunderstandings, suspicions, and slanders. She was separated from the children, who were then taken far from home. At the age of nineteen, she returned to live with her mother. Despite these trials, she did not think of herself, but helped the children to accept this difficult separation. Friendly but firm, and completely calm, she defended the rights of the minors, forgave generously, and reconciled the two families. Her suffering did not make her bitter, but only brought out her natural capacity for mercy and compassion.

She never considered becoming a religious sister, but with regard to her future, prayed that the Lord would show her the husband whom He had planned for her. In fact, however, she came to see clearly through prayer that God wished to be the only spouse of her soul. Gaetana was disturbed by this. She brought it to her confessor, who confirmed that God was truly calling her. She thus asked to enter the convent of the Canossian sisters of Bassano and was accepted as a postulant. She spent five happy months with that community, but had another premonition in her prayers that prepared her for her mother’s death, which came a few days later. Consequently, she had to leave the convent to take care of her younger siblings. For years, she tackled many difficulties: family illnesses, sorrows, and economic struggles. In spite of it all, she still managed to keep up a real spiritual regimen. She consulted with her confessor and prayed earnestly and frequently to recognize God’s will for her. With humble openness, she remained always attentive to what He asked of her, both in the depths of her heart and in the needs and circumstances of the poor of her city.

When she was with the Canossians before the premonition of her mother’s death, Gaetana had sensed that God was preparing her to create a shelter where she would “dedicate herself entirely to the service of the poor and thus to fulfill His will.” Since this vocation seemed like a strange and incredible thing to her, she kept it to herself for a long time, until she summoned up the courage to discuss it with her confessor. When she finally did so, he seemed not to take the idea very seriously. Whenever she saw a poor person taking shelter, however, Gaetana heard once again the call, “I want you among my poor little ones.” She said, “The idea of a shelter followed me everywhere.” When at the age of twenty six she was finally free from family obligations, she was finally ready. Following a serious and shared discernment, the Jesuit Fr. Bedin supported her plans, telling her, “Yes, Gaetana, the Lord wants you for a shelter.”

In 1853, “only to do the will of God,” Gaetana went to a hospital for beggars, which admitted, in wretched conditions, 115 guests, “mostly victims of a disorder or vice.” She found among them “disorders and abuse of almost of every kind.” She remained there for the entire rest of her life, thirty-six years, and dedicated her whole self with tireless charity. In watching over the dying in bed and performing the meanest services for the sick and elderly, she did everything with the self-denial, gentleness, and sweetness with which the Lord himself served the poor. She was inspired by a great trust in God and a desire to belong to Him and please him in everything. At the age of thirty-three, with the permission of her confessor, Fr. Simonetti, she took a vow of total interior self-gift to God, “ready to accept whatever the Lord had in store for her.”

With unlimited confidence, she put herself entirely in God’s hands, “a poor instrument which he uses for his own plans.” She credit Providence alone with the birth of the religious community which arose privately and simply with the profession of her first two companions in 1865. The name “Daughters of Divine Will” came to Gaetana for her and the young women who followed her, because it underscored their characteristic “single-minded devotion to the will of God, through a total abandonment to God and a holy zeal for the good of one’s neighbor, always ready to sacrifice for him.”

Gaetana’s first companions were inspired by the same spirit as her, to consecrate themselves to the will of God and dedicated themselves to serving the poor of the shelter and any neighbor in need, especially with helping the homebound sick and performing other works of charity in response to whatever needs might arise. The bishop of Vicenza approved the first rule of the congregation in 1875.

Gaetana died on November 26, 1889, lovingly attended by her daughters and deeply respected by her fellow townspeople.

The canonical recognition of her mortal remains was carried out for her approaching beatification. These remains, most prominently a relic of her heart, are venerated in the chapel of the General House of the Sisters of Divine Will in Bassano del Grappa.

Actor of the Cause: Congregation of the Sisters of Divine Will