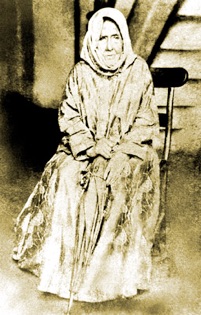 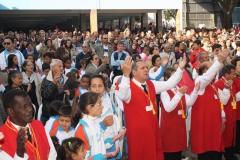 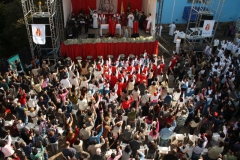 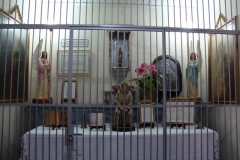 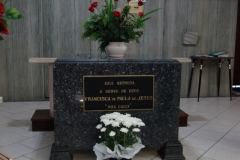 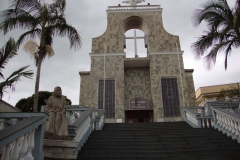 Blessed Francisca de Paula de Jesus, commonly known as Nhà Chica (“Aunt Frances”), was born in 1808 in São João del Rey, Minas Gerais, Brazil. She was named for St. Francesco di Paola, a miracle-worker, founder of the Order of Minims, and a great saint, to whom the slaves of South America were very devoted, especially in Minas Gerais. She had no surname, being the daughter of Izabel Maria, a slave, and an unknown father, probably the master of the estate.

She learned her prayers and devotions from her mother, but being a woman and a slave, could not receive any formal education. As an adult, she never felt the need to learn to read; instead, as she confessed to Dr. Henrique Monat, through almost all of her life, she “wanted only to listen to the reading of Sacred Scripture; when someone granted me that pleasure, I was satisfied.”

Francisca de Paula, in 1821, newly freed from slavery, moved with her mother and her brother Theotonio Pereira do Amaral to Baependi, a developing city in which, a few months later, she was orphaned.

Just before she died, Francisca de Paula’s mother advised her to lead a withdrawn life, so as better to practice charity and protect her Christian faith. Thus, despite many proposals of marriage, she refused them all and remained committed to fulfilling her mission. All the while, she never betrayed any annoyance with her suitors, instead professing gratitude for their good intentions.

Following the advice of her mother, she went to live in a cottage on a small hill at the edge of the neighborhoods of Baependi, dedicating herself there to prayer and care of the poor. She decided not to live with her brother, who had become an officer in the National Gaurd, then a city councilman, devoted to commerce.

Thus Francisca de Paul chose, starting in her youth, a life of poverty, living in prayer, being poor among the poor. Her zeal for the Lord pushed her to organize daily and weekly prayer meetings among the people of her neighborhood, to offer a weekly lunch for the poor, and to give almost to the needy. She soon became the humble “mother of the poor,” as she was called, ready to receive whoever approached her to ask for prayers, advice, consolation, and comfort.

Her faith led her to give up a comfortable, carefree life for the good of her fellow man. Truly, she was a light placed on lamp-stand, in the words of the Gospel. In fact, though she was a former slave and a descendant of slaves, she attracted people of every race and political leaning, because they saw in her a woman of God, full of faith and love.

For a full sixty-five years, her house was a place for rich and poor, young and old, ordinary people and imperial advisers, coming not only from Minas Gerais but also from the nearby state of São Paulo and above all from the present-day capital, Rio de Janeiro. Many townspeople who were going to the nearby center of Caxambu, would go to her, first out of curiosity, then to ask for her prayers and advice. She had a response for all, not making herself a prophetess, but instead following, as she would say, “what Our Lady says and nothing more.”

She called the Blessed Virgin Mary “Minha Sinhá” (“My Lady”) and confessed openly, “I pray and Our Lady hears me and reponds,” or, “I pray and it is the Spirit who inspires me.” It was in this context that the Virgin Mary asked her to build a chapel in her honor.

Francisca de Paula’s brother passed away in 1862, designating her as his sole heir. With this sizable inheritance, she was able to increase her charity and service work, providing also for the construction of the a chapel dedicated to the Immaculate Conception of Mary. In this project, she exhibited a great talent for involving all the people who visited her.

On July 8, 1888, she discerned the need to do away with everything she owned, drawing up a will in which she left her possessions to her parish. She specified all that should be sold and given to the poor, and even how her funeral should be conducted and how many Masses should be celebrated for her intentions and those of her loved ones. Her fine dress was given to a poor girl for her wedding.

She who was “Nhà Chica” to all died on June 14, 1895. Her body remained exposed for a full four days without suffering the least sign of decomposition, thus allowing the faithful to come from all around in large numbers, to give her a final farewell. Her body was set out for her funeral rites in the main church of Baependi, then was born on the shoulders of several young women to the chapel she had built, where she was then buried. In 1999, canonical recognition was completed, and her mortal remains were placed in a tomb of granite in the same place.

Blessed Francisca de Paula’s spirituality had a deeply evangelical meaning, for it was based entirely on the love of God and neighbor, manifested in the simplest and most natural way, with no scholarly or theoretical framework.

Actor of the Cause: Diocese of Campanha

Path of the Cause
Super vita, virtutibus, et fama sanctitatis

Diocesan Phase
Diocese of Campanha
-Nihil Obstat from the Congregation for the Causes of Saints January 17, 1992
-I: Diocesan Inquiry 1993-1995
-II: Supplementary Inquiry 1998