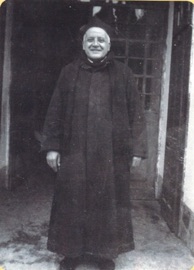 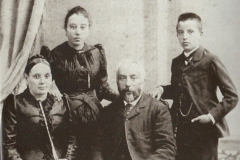 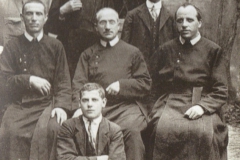 Born on May 19, 1878, in the Filipino quarter of Verona, Filippo Bardellini was spared by Our Lady of Lourdes at the age of seven, as he himself remembered.  Becoming an external brother of San Filippo on January 1, 1893, he entered the oratorian family of Verona in 1901.  He attended neighborhood schools, first those of the Stigmatine order and then the seminary, and was ordained a priest on August 10, 1904.  After a some pastoral work in the parish of the Filippini fathers, of whom he would become provost many times between 1926 and 1948, on January 1, 1916, he was named rector of San Pietro Incarnario.  The history of San Pietro Incarnario and the Filippinis, from the late 1700s to the early 1800s and after the recovery of 1820, is filled with even more Veronese servants of God and blesseds: Fr. Mazza, Fr. Steeb, Teodora Campostrini, and Fr. Provolo.  They followed the efforts for a Veronese religious community and pastoral work for German residents of Verona by Antonio Rosmini (1797-1855).  Then, in the years 1875-1885, some initiatives of the Catholic movement took over, such as the Society of Catholic Workers founded by Fr. Anacleto Dalla Chiara (1824-1885), as well as a charitable institution for the children of the city.  At the beginning of his ministry, which last last almost thirty years from 1916 to 1944, in the midst of the Great War, Fr. Bardellini opened “The Soldier’s Meeting,” a meeting place for veterans, which he founded with the help of Fr. Isacco Meggiolaro (1889-1966) of the Oratory of Vicenza, as well as others.  San Pietro Incarnario also gave rise at that time to a new foundation of the Poor Sisters of Nazareth and a charity for the handicapped.

Naturally sensitive and generous, Fr. Filippo began in 1910 to take in people in need at his family home.  Various charitable projects were then begun from there.  Drawing strength from St. Giovanni Calabria, in 1921 he founded the Poor Sisters of Nazareth, concerned above all with providing assistance and education to the mentally handicapped.  The community began its work in 1927.  The branch opened in Ponton and was followed by others in Volargne and Corrubio.  On August 15, 1933, with the imposition of the Miraculous Medal, the first sisters made their religious profession, led by Teresa Scaglia (1881-1958).  After beginning to take in handicapped children in 1933, Fr. Filippo founded a men’s community in his house in 1937, the Poor Brothers of Nazareth, with the same spirit and purpose as the female branch.  No new branches followed the first community, while the children that were taken in were moved first to Ponton and then to Corrubio in Negarine.  Fr. Filippo dedicated the rest of his life to building up this foundation, which went through grave challenges, especially during the Second World War.  When tragedy struck, with the destruction of the house at Volgargne and death of twenty people inside on November 21, 1944, he answered with hope and abandonment of the will to God.  After he fell ill, he spent the last eight years of his life in sickness in Ponton in Domegliara.  In 1955, he entrusted his possessions in his will to the Flippini fathers, pending civil recognition of the Poor Sisters of Nazareth (which came came on February 6, 1961), who would receive the entire inheritance of their founder on November 13, 1964.  Meanwhile, on August 24, 1956, Fr. Filippo died in a state of holiness at the age of seventy-eight years.

He was initially buried in the cemetery of Verona, but later moved, on February 3, 1996, to the chapel of the General House of Ponton.

Actor of the Cause: Instiute of the Poor Sisters of Nazareth

Path of the Cause

Nihil Obstat from the Congregation for the Causes of Saints May 23, 1981