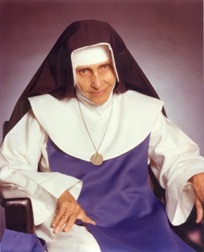 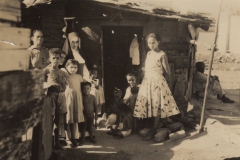 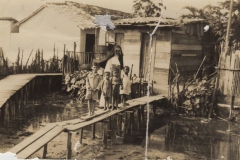 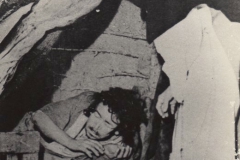 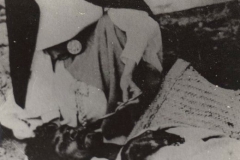 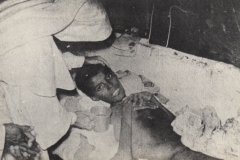 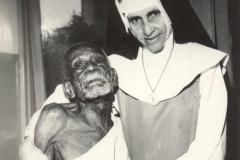 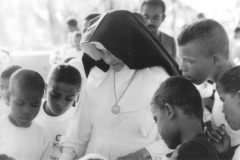 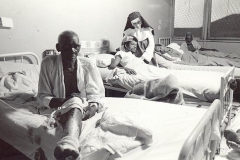 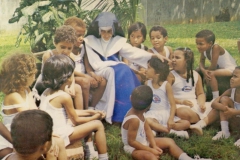 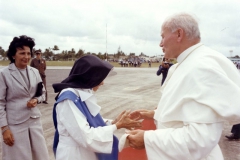 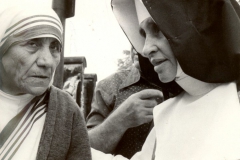 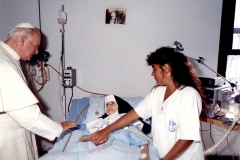 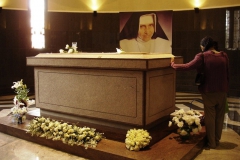 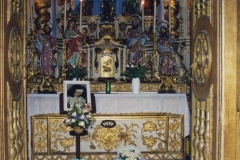 Blessed Dulce Lopes Pontes was born Maria Rita on May 26, 1914, in Salvador de Bahia, Brazil, the second of five children of Agusto and Dulce Maria de Souza Brito Lópes Pontes. Having lost her mother at age six, at about the age of sixteen she began to exhibit the exceptional charity that would stay with her throughout her life. In the basement of her house, she welcomed poor children, adults, and elderly people and cared for them, getting from her family and neighbors food, clothing, medicine, and small things to ease their suffering.

While attending a school for teachers in Salvador de Bahia, she made the acquaintance of a Franciscan tertiary and later met the Provincial Superior of the Missionaries of the Immaculate Conception. Soon after getting her diploma, on February 8, 1933, she entered this congregation. On August 15, 1934, she made her religious vows and took the name Dulce, in memory of her mother. Returning to the city of Salvador for three months as a volunteer nurse in the “Spanish Sanatorium,” she took a course in applied medicine.

In 1935, she founded the first Christian workers’ movement of Salvador: the St. Francis Labor Union, as well as the Labor Society of Bahia in 1937. In 1939, she opened the School of St. Anthony, a public school for working class people and their children, in the Massaranduba quarter in Salvador. In the same year, she began to house the sick in the abandoned buildings of the city. In 1949, with the permission of her Superior, she began to host seventy sick people in a chicken coop-turned-shelter next to the house of her community. In 1960, the Sister Dulce Social Hospice, with a charter detailing its foundational principles and emphasizing its solely humanitarian character.

In the July of 1979, the Cardinal Avelar Brandão Vilela, Archbishop of Salvador, invited Mother Teresa to open a house in Alagados. Sister Dulce took this opportunity to meet her. Exactly one year later, she had another memorable meeting, one with Pope John Paul II.

On February 8, 1983, the new St. Anthony Hospital was opened, which the people of Bahia considered another “miracle of Irma Dulce.”

The final months of her life were weighed down by illness. Her condition worsened in November 1990. In October of 1991, John Paul II came to Salvador and wanted to visit Sister Dulce. Cardinal Lucas Moriera Neves recalled that the Holy Father said many times: “This is the suffering of an innocent, just like the suffering of Jesus.” She approached all her suffering by giving herself to the Lord’s embrace. On March 13, 1992, Sister Dulce passed away in Bahia, well-known for her holiness. Her body was carried on a firetruck, with an honor guard of cadets from the military police, for a procession of six kilometers. To this day, she remains known to all as the “Mother of the Poor” and the “Good Angel of Bahia.” She was buried in the basilica of Nossa Senhora da Conceiçao da Praia. In 2001, her body was moved to the Church of the Convent of St. Anthony, next to her charitable foundation. On June 9, 2010, the conclusion of canonical recognition of her mortal remains was celebrated, and her body was moved into a tomb in the new church of the Immaculate Conception of the Mother of God in Salvador.

Actor of the Cause: Irmã Dulce Social Charities

Path of the Cause
Super vita, virtutibus et fama sanctitatis