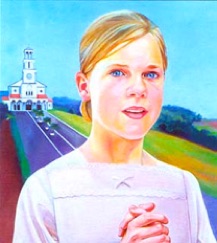 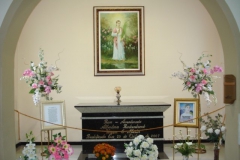 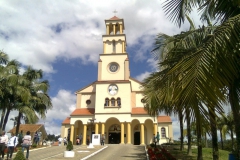 Albertina was born on April 11, 1919, in the village of São Luís and the parish of Vargem do Cedro, part of the town Imaruì and the diocese of Tubarão in Santa Caterina, Brazil. Her parents, Enrico and Giuseppina Boeing, were descended from German immigrants who had come to Brazil from Westphalia in 1860. She was baptized on May 25, 1919, received confirmation on March 9, 1925, and made her first communion on August 16, 1928. Her parents, farmers who lived in a humble wooden house, were good Christians who raised their children in the faith, making sure that Albertina learned the tenets of Christianity from an early age. They taught her the traditional daily prayers, visited the local chapel whenever it was open, and went to confession whenever a priest came to the village. They took a great interest in preparing her for her first communion, which they said would be “the happiest day of her life.” She had a great devotion to Our Lady and prayed the rosary regularly, either in the chapel or at home with her family. She was also devoted to St. Aloysius Gonzaga, the patron of the small village church. Her outstanding piety flourished into a virtuous, Christian life, which only grew with age. She loved her work and household chores; she was obedient, quiet, and humble; and she showed great patience towards her siblings, who often humiliated or even beat her. At school, her teacher admired her and praised her for her spiritual and moral virtues, which seemed beyond her years and greater than those of her peers. This favorable religious atmosphere helped absorb the faith and life of a Christian, not only in her classes and studies but in her daily life.

One day, the girl was out in the countryside searching for a lost ox, when she met one of her father’s hired workers named Indalício Cipriano Martins, to whom she was bringing something to eat. He started chatting with her and then tried to take advantage of her and violate her. The girl steadfastly resisted, and the marks left there in the forest show a long and dreadful fight. Albertina resisted to the limits of her strength, but in the end, Indalício killed her with a knife. The day was June 1931. Medical examinations later showed that Blessed Albertina had defended herself from being violated by her attacker.

She was buried in the cemetery of São Luís. In 2002, when her cause was resumed and received canonical recognition, her mortal remains (in a granite sarcophagus) were moved to her parish church.

Actor of the Cause: Diocese of Tubarão